Posted on November 2, 2016 by Burke Campbell

Eric Woolfe in The Harrowing of Brimstone McReedy. Photo by Lyon Smith.

THE HARROWING OF BRIMSTONE MCREEDY is a conventional tale about selling one’s soul to the dark, infernal powers. What makes this story a stand out is Eric Woolfe. Woolfe is an important actor, and he’s compelling to watch. Rather like a cagey vaudevillian, he’s got a few tricks up his sleeve, and ones that give this show a punch. In BRIMSTONE MCREEDY, Woolfe uses an array of queer puppets, card tricks, simple props and eerie lighting to spin a haunting story of deeper insight and echo. What makes this play truly disturbing is that it’s less about the supernatural and more about the perversity of human nature. 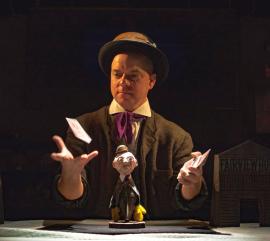 THE HARROWING OF BRIMSTONE MCREEDY is a winding yarn about a man selling his soul in exchange for the power to become a gifted huckster. Set during the Klondike Gold Rush, this magic show is full of mystery, romance, and high adventure. Woolfe plays several characters as he relates this gyrating fable, during which he employs a series of card tricks to great advantage.

Actually, the actor is an expert at cards, and the art of deception. He’s so good, I’m sure he’s been banned from every casino in Vegas. I hope you catch his “possession” at the Red Sandcastle Theatre before it closes, November 13.

Eric Woolfe in The Harrowing of Brimstone McReedy.

After the show, if you have the time, Woolfe escorts you down a haunted staircase into an underground parlour. There, you can sit around a table where he offers you several astonishing  insights into card dealing, in exchange for certain personal spiritual items. This is where even some atheists start to get real fidgety.

I’d just like to go on record in saying that there is something very interesting about Eric Woolfe. He can deliver a full show in a full clear voice that most actors couldn’t manage. He has a skill and rapport that puts the audience instantly at ease, and thus assures all of a good time. But beyond that, Woolfe has a credibility and emotional resonance that gives him particular power on stage. It’s the look in his eyes. He’s the kind of actor you want to see in the works of playwright Samuel Beckett, plays such as Waiting for Godot, Krapp’s Last Tape, Endgame or Happy Days. Eric Woolfe’s bright eyes twinkle with humor and pain, as if they’ve visited the darkest places.

I will definitely be on the lookout for this artist in any upcoming production.

http://www.eldritchtheatre.ca/buy-tickets
All photos by Lyon Smith